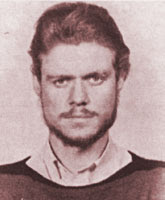 KIM VINCENT FOWLEY (born July 21, 1939) is an American record producer, impresario, songwriter, musician, film maker, and radio actor. . He has been described as "one of the most colorful characters in the annals of rock & roll" and as "a shadowy cult figure well outside the margins of the mainstream." Kim likes to say that he was “hatched on the cracked concrete of cruel California,” and indeed he was. Now, for the first time ever, the music business legend lays bare his beginnings with Hollywood parents who passed him back and forth like a bad script. Kim learned to talk and reckon before he was out of rubber pants, and quickly discovered that he would have to make his own path in spite of the parental shortcomings. He was addicted to words and music at an early age, and wrote verse throughout his life, effectively organizing his ideas and emotions into a unique rhythmic shorthand. In the first of a three volume “hip pocket paperback” series, Kim Fowley recalls his early days as an unwanted child, as a polio victim (twice), as a teenage hoodlum, as a young cat in the California rock n’ roll scene, and as… a poet.

Before beat was Beat, Kim Fowley was onto word warpage beyond compare. He took in Big Sur and Venice Beach and Eric Nord and Thelonius Monk, hardly knowing that he was ahead of the hepcat curve. Kim Fowley has never gone with a trend. He has always trod his own path, although his is one well-drizzled with every name in the music and show biz pantheon. His first record as producer was the iconic "Charge" by The Renegades, which led to a number of small label efforts, capped, in 1960, with Alley Oop by the Hollywood Argyles, which went to #1 in the charts. In 1961 he co-produced "Like, Long Hair" for Paul Revere and the Raiders. All of his personal stories and poems written in the days re recounts, are told in LORD OF GARBAGE, including his involvements with records such as Nut Rocker by B. Bumble and the Stingers, Papa-Oom-Mow-Mow by the Rivingtons, Popsicles and Icicles by the Murmaids and artists like Cat Stevens, Them, Slade, Soft Machine, Frank Zappa, the Mamas and the Mamas, and Skip and Flip. Beyond the dizzying assortment of names and records, is revealed not only the maker and shaker in the music biz, but a poet who dissected these daily chapters with a neat selection of word pictures that drive in the heart of the man and the matter.

LORD OF GARBAGE by KIM FOWLEY!


KIM FOWLEY is (always)… outrageous, continuing to shock and rivet, now with his long-awaited epic trilogy of poetry and prose -- an explosive memoir/roll-call of also-legends who have, in the past seventy years, figured into the neon blitz of Kim’s deliciously demented life. 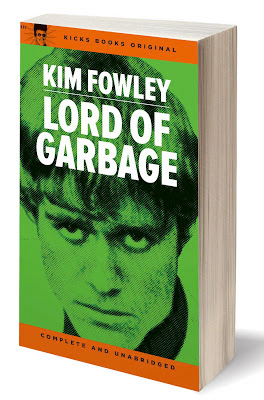 Born in 1939 to actor parents, Los Angeles native Kim Fowley came of age while still in the single digits, forced to grow up as a footnote to his parents’ own Tinsel Town aspirations. A child of genius and neglect, he grew up with an innate drive to survive and thrive. His incredible storytelling comes to life in this first volume of his GARBAGE trilogy. LORD OF GARBAGE starts out with his earliest memories, and cajoles the reader through a brambled youth punctuated with disaster and success.
Self-expression first took the form of poetry for Kim- rhythm and rhyme- the heartbeat of Hollywood’s desolate mayhem—pulses through his words with an attitude and honesty that few writers ever claim.
In music, Kim’s solo work spans 28 LP’s and his production credits as producer and/or writer begins in 1959 with the blast instrumental “Charge” by the Renegades, which was followed up by the iconic million-seller Alley Oop by the Hollywood Argyles and the mesmerizing mega-hit Popsicles and Icicles by the Murmaids. His discography runs into hundreds of records, compositions, and productions on multiple continents, and he has earned of roomfuls of gold and platinum records.
Kim comes into his own as an author with LORD OF GARBAGE, a revealing look into the life of one of the true giants of the American music industry.
______________________________________

KICKS BOOKS DELIVERS A BOOK OF BLOOD (AND THUNDER)
By Kim Fowley
(One Of God’s MOST GROTESQUE BASTARD OFFSPRING!)

“So What?” you might say. Can Kim Fowley write a book that a reader can’t put down? Of course he can. KVF= Kim Vincent Fowley. He has sold Creative Contributions of Music & Movies, in 110 Countries Of The World. For over 50 years. The pages of LORD OF GARBAGE contain the Confessions of a Madman. In luxurious Prose, & dynamite poetry. Combining both Literary Disciplines, in a Book Format First. Kim Fowley is NOT a nice guy. But, he wrote 3 separate books that are more interesting than he is. Completed & turned into the Executive Offices of Kicks Books… covered in Blood, Pain, & Tears.

Don’t invite Kim to any of your Holiday Parties. He is no fun in a Polite Society Situation. He’s not good company, but his books will be, if you’re Empty, Bored, or Insanely Curious. KVF Wrote this PR Announcement. Nobody, can put words in Kim Fowley’s Mouth. Once a Control Freak/ Always a Control Freak.

LIMITED EDITION GARBAGE PARFUM FOR HE & SHE! 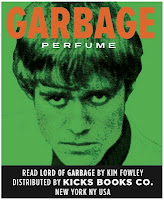 Coinciding with the book release (LORD OF GARBAGE) is Kim’s signature fragrance GARBAGE, packaged with a morsel of authentic Fowley poetry garbage, and of course, a record spindle. The fragrance evokes Kim’s earliest memories of rejection and objection and is formulated with the mannish herb Eugenia Aromatica, ritually employed as an aphrodisiac and gossip-stopper. 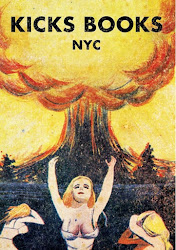