Mind Over Matter: The Myths & Mysteries of Detroit's Fortune Records 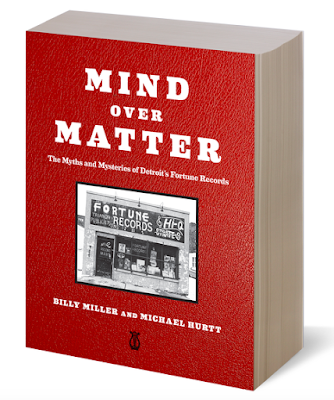 KICKS BOOKS PRESENTS...
MIND OVER MATTER
The Myths And Mysteries of Detroit's Fortune Records
by Billy Miller and Michael Hurtt

Kicks Books celebrates ten years in the business of "hip pocket paperbacks" with our massive 576 page, full color, hardcover book about Detroit's sensational, seminal Fortune Records label, a tome that has been in the works for... you guessed it, ten years!

Kicks Books began at the request and behest of two individuals: Fortune Records star artist Andre Williams and Ohio's greatest literary spawn, Harlan Ellison. Andre had never written a book; Harlan had written many. Andre's SWEETS, written in court ordered rehab, became the first hip pocket paperback from the new Kicks Books imprint, and was quickly followed by many others.
This blog entry will expand in a few days. But today, we are delighted to inform you that our first hardcover book is upon us: MIND OVER MATTER: THE MYTHS AND MYSTERIES OF DETROIT'S FORTUNE RECORDS by Billy Miller and Michael Hurtt. This is a massive 576 page hardcover book, full color, printed on heavy semi-gloss stock, with stitched Smythe binding.