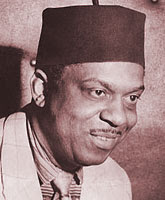 SUN RA (1914-1993) Sun Ra was a prolific jazz composer and bandleader, born Herman Poole Blount in Birmingham, Alabama. He was active in the South in his early years but made his mark in Chicago. He abandoned his name and old life for the decidedly cosmic “Sun Ra”, a person and personality totally apart from his old life as Herman Blount. A voracious reader and student of all things philosophical, his music and art took an interstellar turn for the unorthodox. Afrofuturism was a philosophy that celebrated the mysteries of the planet and the universe. His music and writings divulged his intergalactic eccentricity, but until now, with the never published “lost” poems collected in THIS PLANET IS DOOMED, we discover. 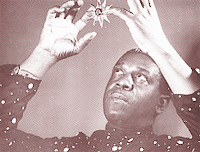 Along with sidereal stanzas, a realm of attitudinal poemics that reveal his dissatisfaction with humankind. There is an undercurrent of anger in this collection that has electrified Sun Ra’s followers. A foreword by esteemed poet Amiri Baraka and an observational essay by popular culture historian Bhob Stewart make this a thought provoking hip pocket paperback that will be drawn upon time and time again. 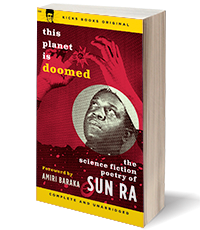 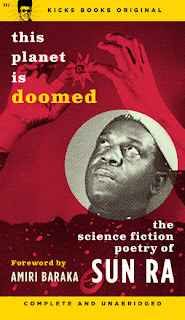 THIS PLANET IS DOOMED: THE SCIENCE FICTION POETRY OF SUN RA
Foreword by Amiri Baraka • Introduction by Bhob Stewart  (KB2)

T-minus 30... the countdown is on for the publication of a new hip-pocket paperback from the masterminds at KICKS BOOKS!

THIS PLANET IS DOOMED, which collects the science-fiction poetry of Sun Ra, explodes into the stratosphere on 7/7/11, an auspicious day for numerologists and doomsday enthusiasts alike. 7/7 coincides historically with the detonation of 20 kiloton Little Feller II, the first of the last four above ground nuclear warhead tests conducted in the US.

The date will also evidence interstellar overdrive when Saturn, Pluto, Uranus and Venus form an intense and rare alignment known as the Cardinal Grand Cross.

THIS PLANET IS DOOMED serves up a traumatic torrent of future shock—deeply personal and critical commentary and unsettling advice to the people of Earth, who fail to acknowledge this planet’s role in the universe.

Poet Amiri Baraka's estimable foreword, together with science fiction historian Bhob Stewart’s revealing introduction, set the stage for the heavy dose of the real and the unreal, which are delivered in the pages of THIS PLANET IS DOOMED. 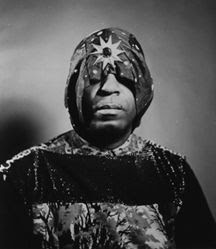 Poet Amiri Baraka’s estimable foreword, together with science fiction historian Bhob Stewart’s revealing introduction, set the stage for the heavy dose of the real and the unreal which are delivered in the pages of THIS PLANET IS DOOMED.


This book was collected from tape recordings and transcriptions culled from the Sun Ra Archives by director Michael Anderson, who worked with Norton records to compile a total of six albums—three collections of rare and unissued music recordings (on LP and CD) and another trio (vinyl only) of unissued spoken word Sun Ra.

THIS PLANET IS DOOMED was expanded with the addition of several key “lost” poems which appear here for the first time.

In conjuntion with the publication of THIS PLANET IS DOOMED, the Orchard has launched downloads of the vinyl spoken word albums, which are entitled STRANGE WORLDS IN MY MIND, THE SUB-DWELLERS, and THE OUTER DARKNESS.

An out-of-this-world promotional fragrance, SATURNIA, will be available in a limited edition of THIS PLANET IS DOOMED. This trend was set with the Andre Williams’ book SWEETS. All future KICKS BOOKS will issue with limited edition promotional sister scents.

THIS PLANET IS DOOMED will be available here on July 7. 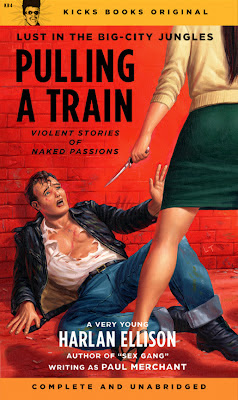 Kicks Books NYC prepares for fireworks with its publication of the controversial collection PULLING A TRAIN, the explosive first volume of twisted early street fiction from noted scribe HARLAN ELLISON.

Known worldwide for his landmark speculative fiction, Cleveland-born ELLISON initially rumbled onto the newsstands hell-bent for leather-- jackets, that is, and zipguns, and shivs, and brass knuckles, and all the accoutrements necessary for basic teen gang violence circa 1957.

Inspired as a teenager in seeing a familiar placement of consonants in the byline of author Hal Ellson's novel DUKE, young Ellison began pecking out his own gritty tales about street kids, the forgotten flotsam of society.

With a taste for printers ink, he would soon be selling stories with a vengeance to crime digests like Guilty, Trapped, Terror, and Web Detective Stories,  and men's magazines including Rogue, Caper, and Knave. Sometimes he used his given name, but most often, he traveled incognito onto the newsstands, passing as Ellis Hart, Derry Tiger, Cordwainer Bird, Lee Archer, and many more.

A paperback collection of his street-wise crime tales saw proper issue in 1959 as THE DEADLY STREETS, as did his groundbreaking first novel RUMBLE, written from first person experience when Ellison (using his nom de guerre, Cheech Beldone) passed initiations into a pack of under-age Red Hook pagans on the Brooklyn waterfront.

Also in 1959, a brown-paper wrapper collection of his men's magazine stories turned up unannounced (and under the counter) as the paperback SEX GANG,  the title of its novella-length lead story. The set of eleven stories was credited to "Paul Merchant", and went unclaimed by Ellison for decades.

Over the years, all of Ellison's books have enjoyed reissue, over and over again, and numerous collections of his short fiction have continued to see print. His adult-audience material, however, has remained unavailable-- until now.

For the uninitiated, we recommend consumption in very small doses. A damp towel and bed rest may be necessary.

For the lively set, prepare to blast into orbit with blade-wielding ferocity as Ellison takes you into a cobblestone wilderness fraught with hate and violence, a street level cosmos where shadowy creatures are hard, and blunt, and malicious, and where hope hangs a shingle that reads, "GET LOST".

In the realm of 1950's juvenile delinquent fiction, it was Ellison who dragged the unnamed genre from the gentle hands of the social workers into a filthy basement, where he worked it over, with great satisfaction, into an alternate universe of hate and pain. Ellison is the king of JD fiction. Of this, there can be no debate.