BROOKLYN GOES HOLLYWOOD as KICKS BOOKS heads West to present author HARLAN ELLISON at the esteemed  LA LUZ GALLERY AND SOAP PLANT for a reading/signing blowout spectacular unlike any  the world has witnessed... the event begins at legendary hangout and sheer salon to  greasers and pomp hoppers everywhere! Coif sculptor impressario Sweeney Todd has created, especially for Mr Ellison and this day in history, the "Cheech Beldone" cut. Get one for the occasion! Then run the half block gauntlet to the SOAP PLANT to experience Mr. Ellison reading, for the first time in history, from his 1959 writings, collected now by KICKS BOOKS in the twin volumes PULLING A TRAIN and GETTING IN THE WIND! 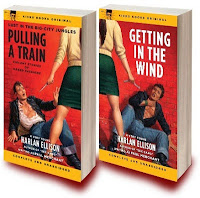 Join the greatest living JD author (a/k/a "writer of juvenile delinquent fiction" for non-teen gangster types) Harlan Ellison for this rare event as he arrives at in grand style at La Luz de Jesus’ neighboring vintage clip joint, Sweeny Todd’s Barber Shop, for a specially designed trim by shop curator Sween Lahman and is then escorted to the gallery for a reading, and signing of his Kicks Books releases, Pulling a Train and Getting in the Wind. Limited edition 11 x 17 posters of the book covers will be available at this event. It will be an afternoon of pizzazz and vinegar with a true living legend!

Ellison was hatched in Cleveland, Ohio in 1934 and grew up in aptly-named nearby Painesville. He ran away from home many times, and worked a colorful string of odd-jobs, including tuna fisherman, crop-picker, nitroglycerine truck driver, door-to-door salesman, and short-order cook. He enrolled at Ohio State from which, after a year and a half, he was promptly expelled for punching out a lit prof. His writing career began at age 11 with a couple of newspaper serials and the sale of a tale to EC Comics. He relocated to New York City in 1955, went underground, and joined a teenage gang in Red Hook, Brooklyn, traveling under the name “Cheech Beldone.” The experience in a black leather jacket and motorcycle boots would affect his work throughout his long and sturdy career. It was filmed for “The Alfred Hitchcock Hour” as Memos from Purgatory. Where his early delinquent books like The Deadly Streets and Web of the City have been reissued over the years, the extremely scare and desirable Sex Gang, a collection of early men’s magazine fare and delinquent-tinged tales, has remained unavailable and unacknowledged until now. Ellison has allowed Kicks Books to issue the stories from Sex Gang in two volumes, with several additional stories from the late Fifties and early Sixties. Pulling a Train and Getting in the Wind, together, encompass all the action, traction and raunch that formed a genre all its own, a style populated by several fiction and science fiction scribes alongside Ellison, but Ellison was, and is, the king of the heap. He continues to rule the kingdom from his typewriter-infested abode in an undisclosed wooded area in Southern California, The Lost Aztec Temple of Mars. 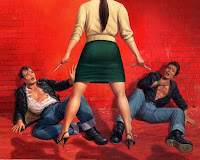 California artist Les Toil’s two torrid cover paintings form a seamless image of the true Sex Gang pack-- street vixens who won't take "no" for an answer, alley rats who find the flash of a blade intoxicating, boulevard dolls who delight in the muffled cry of a face crushed beneath scuffed stiletto heels. This is real life set to the sounds of sirens echoing down the dead end streets of America. The edge of forever... starts at the waterfront.